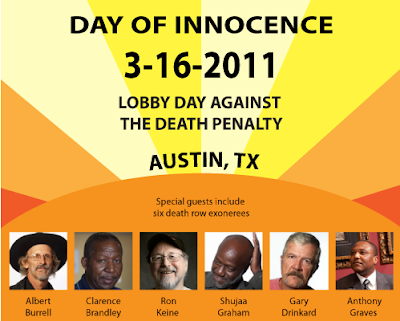 The 2011 Statewide Texas Lobby Day Against the Death Penalty and “Day of Innocence” is Wednesday, March 16. Special guests include death row exonerees Anthony Graves, Clarence Brandley, Ron Keine, Shujaa Graham, Gary Drinkard and Albert Burrell.
People from across Texas will come to the Capitol in Austin to advocate for an end to the death penalty and other reforms that would impact the Texas death penalty, including a package of innocence bills, a bill for a moratorium on executions and commission to study the death penalty system, a bill to require separate trials in death penalty cases and a separate bill that would prohibit death sentences for people convicted under the Law of Parties who do not kill anyone.
This will be a day we will always remember, a day when we stood side by side fighting against the death penalty with people who were wrongfully convicted and sentenced to death. Don’t be one of those people who one day “shall think themselves accurs’d they were not here” and fought with us on the Day of Innocence. Register now!
Below is the schedule for Lobby Day. We will announce rooms later. Please register for Lobby Day, so that we know how many people are coming and so that we can schedule legislative appointments. In 2009 our Lobby Day resulted in several legislators signing on to support the bills we lobbied for. We expect the same success in 2011. We have held a Lobby Day every session since 2003. Also participating in the Lobby Day will be students from the Anti-Death Penalty Alternative Spring Break.
If you can not attend the Lobby Day, you can still help by making a donation (not tax-deductible). Also on March 16, even if you are not in Austin at the Lobby Day, you can call your Texas legislators and let them know your position on the death penalty and urge them to support a moratorium on executions.
Schedule for the Statewide Texas Lobby Day Against the Death Penalty and “Day of Innocence” – March 16, 2011
8 :00 – 9:00 AM Check-in and Meet and Greet at the Texas Capitol. Legislators, staff members, everyone coming to Austin for the Lobby Day and anyone at the capitol and the general public is welcome to attend and meet death row exonerees Anthony Graves, Clarence Brandley, Shujaa Graham, Ron Keine, Gary Drinkard and Albert Burrell who all spent many years on death row for crimes they did not commit.
9 – 10 AM Lobby Training. People coming for Lobby Day will be trained and given assignments. People who received training before Lobby Day can begin lobbying.   Location: Room TBA in the Texas Capitol.

Sometime during the day while the House and Senate are in session the death row exonerees may be recognized and honored with a resolution in the Texas House and/or Senate (We are working to make it happen). Participants in the “Day of Innocence” Lobby Day may also be recognized from the gallery of the House and/or the Senate.

Organizations that would like to participate or co-sponsor the Lobby Day can emailadmin@texasmoratorium.org or call 512-961-6389.