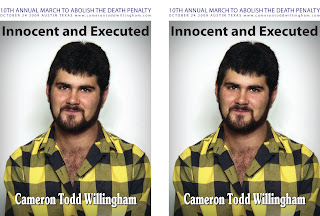 From the Dallas Morning News’ Trailblazer blog comes a report from today’s meeting of the Texas Forensic Science Commission that Chair John Bradley refused to allow a documentary filmmaker from bringing a camera into the meeting at the Hotel conference room where the meeting is being held.

When the state science panel charged with examining whether the state executed an innocent man met this morning, not everybody was welcome. Chairman John Bradley barred a film crew that is producing a documentary about the death penalty in Texas. The film is being spearheaded by Austinite Reid Nelson, an international consultant who isn’t active as an advocate on either side of the issue. Nelson hopes to showcase his film at Sundance and festivals around the country.

The live feed of the meeting is at http://www.innocenceproject.org/tfsc.php.

One of the photos of Todd Willingham we created for the 10th Annual March to Abolish the Death Penalty is frequently visible in the feed on a chair in front of Gloria Rubac, who drove to Harlingen from Houston for the meeting.