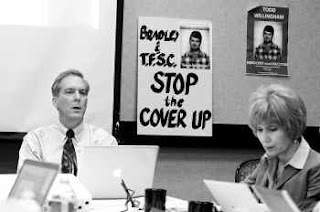 The confirmation of Williamson County District Attorney John Bradley as chairman of the state Forensic Science Commission appears to be in deep trouble, as two Senate Republicans confirmed today that they will vote no.
That would leave Bradley four votes short of the required 21 needed to bring his name up for a Senate vote.
It also means that Bradley will almost certainly remain as chairman of the nine-member commission for a scheduled April 15 meeting, where it could possibly take action on the controversial Cameron Todd Willingham arson case.
Willingham was executed in February 2004 on charges that he murdered his three children by torching their Corsicana home in 1991. He denied killing his children, and an expert hired by the commission said in an August 2009 report that the original arson finding was not sustainable.
Gov. Rick Perry, during a re-election campaign, abruptly replaced three members of the commission and named Bradley, known for his adamant style, as the new chairman. That nomination is now subject to Senate confirmation.
“At this point, his nomination not going anywhere,” said Nominations Committee Chairman Bob Deuell, R-Greenville. “Unless something changes, it’s over.”
But unlike the 2009 nominations of Burleson County businesswoman Shanda Perkins for the state Board of Pardons and Paroles, and Don McLeroy as chairman of the State Board of Education, Deuell said there is no plan to call Bradley’s nomination to a vote so he can be officially voted down.
“No one’s pushing me to bust him that way,” Deuell said. “(Bradley) has asked for some time to talk to senators, and we’re going to give it to him . . . But right now, I don’t see anything changing.”
Bradley said there is no deadline for a vote and that he is continuing to talk to senators to line up support.
“The senators have a right to express their opinions,” he said, declining to detail the ongoing talks.
Should the Senate not vote further on Bradley’s nomination, his term would end at the end of the legislative session in early June. Should the logjam break and his appointment be confirmed, Bradley’s term would end in September.
“I’m getting quite the education in criminal justice, politics and forensic science,” he said.
Last week, Bradley and Sen. Rodney Ellis, D-Houston, tangled during a testy verbal exchange during the Nominations Committee hearing. Bradley accused Ellis of having a conflict of interest by serving as chair of the New York-based Innocence Project, which is pushing to overturn the arson finding in the Willingham case.
At one point, Deuell interceded to demand more civility between the two. Bradley was unapologetic for the exchange, and Ellis within hours had lined up the support of the Senate’s 12 Democrats to block the nomination.
Two Republicans soon joined then.
Sen. Kevin Eltife, R-Tyler, said he is against Bradley’s nomination because of his controversial tenure as chairman of the commission. The exchange with Ellis is “only the latest example,” he said.
“This is no longer about him, it’s about the need for a change,” Eltife said. “Once a situation becomes this volatile, sometimes you need to make a change. That’s what I think the commission needs.”
Sen. John Carona, R-Dallas, said he also opposes Bradley’s nomination, and has no intention of changing his mind.
“I watched his disrespect for members of the Legislature on this and many other occasions, and based on that issue alone I will vote no,” he said. “His sheer dismissive attitude toward questions, toward the Legislature, that he has demonstrated time and time again, cannot be overlooked.”
Bradley’s Republican supporters said they hoped to persuade Sen. Eddie Lucio, D-Brownsville, to vote for the nomination. But Lucio said he is not switching.
“I don’t like the way he treated me on my life-without-parole bill last session, the way he talked down to me and treated me during that discussion,” Lucio said. He was the biggest opponent of that bill . . . There was no common courtesy.’